“The thing that a lot of people cannot comprehend is that Mother Nature doesn't have a bullet with your name on it, she has millions of bullets inscribed with 'to whom it may concern.”
– Unknown

Isolde Garreau was the oldest of two boys and two girls. She was very protective of her younger siblings and would sometimes take the punishment if they got in trouble for being children. This wasn't so bad. Kids were built differently in the 30's than they are today. Isolde was no exception. A fairly tall brunette, she started to develop in her early teens and it caused a lot of catcalling, which she /hated/. Her father saw how flustered and upset she was by this though and started to teach her to punch guys if they ever tried anything. She had to use her fist to put the emphasis on 'NO' many times.

When Isolde was twenty eight she was engaged and about three weeks from getting married. She couldn't have been happier. They were out checking on a house that they were going to be purchasing. There was two acres of land that went with it. A decent start to life. Sadly on their inspection they came across a group of loyalists that were dragging a young woman off. They tried to intervene and her fiance was killed in the process. Which traumatized Isolde. With the man dead and the woman a crying messed, they carted her to Arcadia with the other younger woman. A two for one deal! She was sent to the Enchanted Forest. She never did find out the proper name for her Keeper, but it was reminiscent of a fucked up Disney Princess story gone REALLY wrong. Given her tendencies to be kind and sweet she was a light when darkness fell. Something that could guide the Forests hunters through when one of the captives fled. From there she was taught to mend wounds and to take care of the health of the hunters. Years passed. Sometimes it felt like hundreds. Hunters came through and Isolde was their guiding light and the person that took care of them.

Until one day, a Hunter ventured into the forest. One that reminded her of her dead fiance. Something that sparked her memory and her emotions. She fled. The hunters were sent after her. One shot her in the shoulder. The bullet burying deep into her skin and sapping her energy, but she remembered the punching technique that her father taught her. She didn't know if it would work, but she'd grown stronger in Arcadia and she knocked the hunter out and left him unconscious, instead of dead. The worst part of her escape were the thorns. But she didn't stop, if she would have stopped running she'd still be in Arcadia. Probably dead given her Keepers temperament. She ran and ran until she was bloody and beaten and on a street...

...A really busy street with new and weird cars. Isolde was hit and knocked unconscious. When she recovered she was a jane doe in the hospital. But thankfully, there was a Changeling that was among staff. One that was tasked with looking out for new escapees. This was in 2000. She'd been in Arcadia for forty years. She was dumbfounded. After healing some, she made her way home to the rest of the Garreau family. From there she worked to get her Doctorate in Medicine. She was going to stick with her want to take care of people. She fell in with the Spring court, mainly due to their healing. But she also learned that enabling people to indulge isn't that bad either. She did have a secret greed though. One that found use in the Guild of Goldspinners. She hasn't went overboard. She does like the enforcing bargains part of the Entitlement though. She's been in the Entitlement for 10 years. She dabbles in hedgespinning when she's not healing with the Greenies or pulling a double at Riverside Hospital. 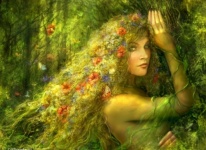